The Second City Guide to the Symphony

The Second City Guide to the Symphony is a light-hearted blend of hilarious sketch comedy and beautiful music — including works by great masters such as Mozart and Mahler alongside hilarious original orchestral songs. Don’t miss out as Chicago’s legendary comedy troupe Second City joins The Phoenix Symphony for a celebration of shared love of the symphony orchestra, taking a satirical but loving look at the players, the composers, the personalities, and even the audience. 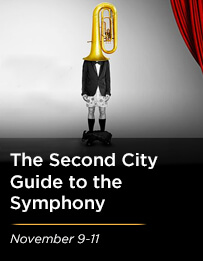